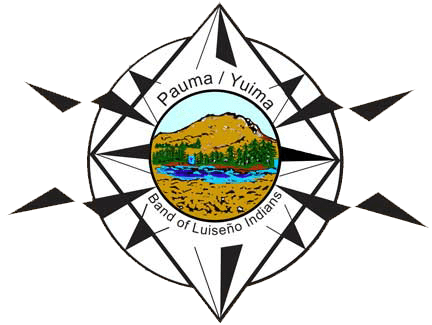 Federally recognized since 1891, and established in August of 1892, the Pauma Band is one of seven Bands of the Luiseño people located in San Diego and Riverside counties. The band has a rich history that goes back thousands of years.

The Band opened Casino Pauma in May 2001, providing employment to the Tribal Members and the surrounding communities. Its revenues enhance the Tribal Government’s ability to meet the essential needs of the membership.

The Pauma-Yuima Band of Mission Indians is one of seven Luiseño groups living in Southern California. The Luiseño or Puyumkowitchum are a Shoshonean (Takic) language speaking group that traditionally lived in a 1500 square mile area in today’s Orange, Riverside, and N. San Diego counties of California. Cultural traditions and archaeological evidence contend that Shoshonean groups migrated to Southern California 5-8,000 years ago from the Basin due to severe altithermals. In the Luiseño tradition their culture hero, Wiyot, first identified important geographical features, especially natural springs, that are still marked with rock art inscriptions. The Luiseño grew to as many as 15,000 in population with major villages and gathering sites from the Peninsular Ranges to the Pacific Ocean. The great abundance of wildlife and plants on the land and in the water allowed the Luiseño to maintain a relatively sedentary lifestyle in the mild climate of Southern California.

Evidence of acorn and seed processing and shellfish use still dominate ancient sites throughout the Luiseño territory. The most visible evidence is the bedrock milling stone mortars and metates used for processing seeds like acorns that are seen in parks like Palomar Mountain State Park. The use of plants and expertise the Luiseño developed is best seen in their outstanding coiled baskets that are considered the best of their kind in the world.

Being on the edge of the continent, exposed the Luiseño to coastal seafarers. The first documented contact came with the Spanish under Juan Rodriguez Cabrillo sailing along Alta (Upper) California’s coastline beginning in 1542. For over 150 years sporadic contact with various seafarers was made along the coast. Eventually, the Spanish came to stay in 1769. In 1798, Mission San Luis Rey was established and the local American Indian people were called Luiseño by Spain. By 1810 assistencia missions further intruded into Luiseño territory with the building of Las Flores and Pala. Many other Europeans and later Americans began sailing into the area. An American merchant sailor, Richard Henry Dana, reported that pirate ships frequented the area and were involved in the sea otter pelt and tallow trade with Indians in the missions.

Spain forced over 3,000 Luiseño in from surrounding villages to build and maintain the mission in a system referred to as the encomienda. The archaeological record indicates that local villages and seasonal sites close to San Luis Rey Mission were abandoned at this time, as people moved closer to the missions. However, some of the people in the mountains to the east, like Pauma, stayed in traditional villages and were able to maintain Luiseño traditions and remain culturally intact. Spain gave up much of her colonial empire and in what was called secularization the church abandoned the missions. By 1834 in the Mexican Period the mission lands of San Luis Rey were divided in “Ranchos” with Luiseños working as ranch hands on these huge ranches, or in some cases owning them. Some Anglo-Americans like J. J. Warner, J. Forester, and C. Couts acquired land grant ranchos and married into some of these families that became known as Californios.

After the Mexican American War in 1846 and the Treaty of Guadalupe Hidalgo in 1848, the Luiseño came under the rule of the United States. American settlers, especially after the Civil War, encroached on Luiseño lands from 1848 to 1875. Some Luiseño remained in small settlements near the missions, while others returned to old villages in the mountains. The Anglo-American settlers took the best farm and grazing lands in the valleys. In the mountains mining speculation attracted other Anglo-Americans to areas like Palomar Mountain. During 1851-52 eighteen treaties between the United States and California Indians were negotiated by three commissioners. The Luiseño were lumped into a large “Mission Indian” reservation. The California state legislature blocked federal ratification of these treaties. In 1875 an executive order by President Grant set aside reservation land for Luiseño at Rincon, Pala and La Jolla. Later, beginning in 1891 reservation land was set aside for Luiseños at Pauma-Yuima, Pechanga, and Soboba with the Act for Relief of Mission Indians. In effect, Luiseño political structure was forced to become encapsulated under these reservation structures. Some Luiseño families in the coastal areas near the original Luiseño missions were not included and remained federally unrecognized. Today, they are organized as the San Luis Rey Band of Mission Indians.

The California Indians’ Jurisdictional Act of 1928, and organizations like the Mission Indians Federation led to litigation for compensation of lands lost due to the unratified treaties. The Great Depression brought hard times, loss of land and disruption to claims. The Indian Reorganization Act of 1934 only added beauracratic red tape. World War II also disrupted litigation, but after the War the Indian Claims Commission Act of 1946 gave new life to land and resource claims. Attempts at termination in the 1950s were blocked and Public Law 280 allowed for some self determination with increased state jurisdiction. The 1970s brought in greater self determination and Pauma-Yuima became part of a number of coalitions other federal bands/tribes in securing water rights, health service, education and resource preservation. The Indian Self-Determination Act (PL. 93-638) provided Pauma-Yuima the resources to install irrigation lines for avocado and citrus groves.

The passage of the Indian Gaming Regulatory Act (IGRA) of 1989 and Native American Graves Protection and Repatriation Act (NAGPRA) of 1990 brought increased revenue and increased control of cultural resources. In 2000 Pauma-Yuima signed its compact to establish Pauma Casino and it opened in May 2001.